Ada and the Memory Engine

Written by Lauren Gunderson
Directed by Gary Graves
Produced in: 2015

A new play about the world’s first computer programmer

As the Industrial Revolution dawns, young Ada (daughter of the flamboyant and notorious Lord Byron) sees the boundless creative potential in the “analytic engines” of her friend and soul-mate, Charles Babbage, inventor of the first mechanical computer. Ada envisions a whole new world where art and information converge – a world she will not live to see. Jane Austen meets Steve Jobs in this poignant pre-tech romance heralding the computer age.

Special music composed by: The Kilbanes 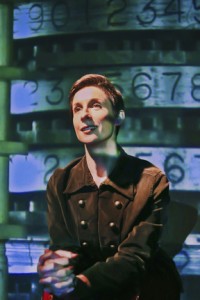 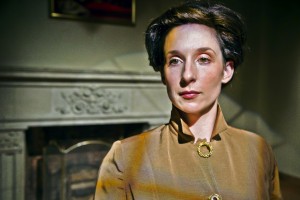 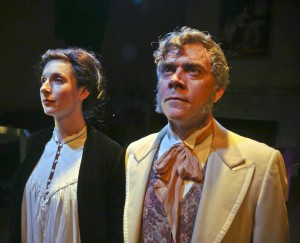 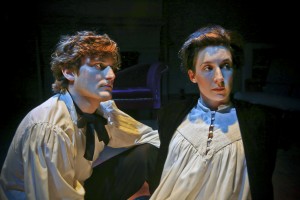 Kat Zdan* and Josh Schell meet in a moment out of time and space in Ada and the Memory Engine by Lauren Gunderson.

“Prepare for your circuits to be blown.” KQED, The Do List

“This one is definitely worth seeing” -SF Weekly

“Go see Ada and the Memory Engine Now!” -For Words

Charles Babbage designed the first automatic computing engines. He invented computers but failed to build them. Babbage designed two classes of engine: Difference Engines and Analytical Engines. Difference engines are so called because of the mathematical principle on which they are based, namely, the method of finite differences. The first complete Babbage Engine was completed in 2002, 153 years after it was designed.

A portion of Difference Engine No.1: 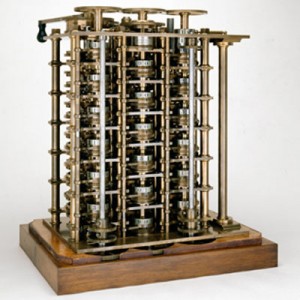 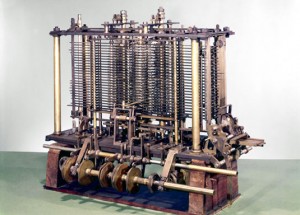 It had an internal repertoire of the four arithmetical functions and could perform direct multiplication and division. It was also capable of functions for which we have modern names: conditional branching, looping (iteration), microprogramming, parallel processing, iteration, latching, polling, and pulse-shaping, amongst others, as well as a variety of outputs including hardcopy printout, punched cards, graph plotting and the automatic production of stereotypes.

Punched Cards for the Analytical Engine: 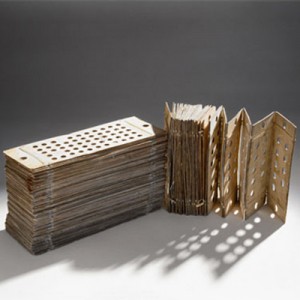 Visit the Computer History Museum website to learn more about this fascinating and ground-breaking history.

A calling card from Charles Babbage to Ada Lovelace:

Who’s Who in the Play; the Historical Figures upon whom our Characters are Based

Charles Babbage, FRS (Dec 26, 1791 – Oct 18, 1871) was an English polymath. A mathematician, philosopher, inventor and mechanical engineer, Babbage is best remembered for originating the concept of a programmable computer, The Analytic Engine. From 1828 – 1839, Babbage was Lucasian Professor of Mathematics at Cambridge (a title now held by Steven Hawking), and his bustling intellectual salons were always likely to include Charles Dickens, Michael Faraday, and Charles Darwin.

Anne Isabella Noel Byron, 11th Baroness Wentworth and Baroness Byron, (May 17, 1792 – May 16, 1860) was the wife of the poet Lord Byron. A highly educated and strictly religious woman, she seemed an unlikely match for the amoral and agnostic poet. Their marriage lasted one year and produced one child, Ada. She raised the girl with absolutely no access to anything remotely “poetic,” forcing her attentions solely on math and music. She only told Ada who her father was when Ada was a teenager. She never remarried and refused to go to her only daughter’s funeral. Lady Byron’s reminiscences, published after her death by Harriet Beecher Stowe, revealed her husband’s incest with his half-sister, a scandal that had forced him into permanent exile.

George Gordon Byron (Jan 22, 1788 – April 19, 1824), commonly known simply as Lord Byron, was an English poet and a leading figure in the Romantic movement. Among Byron’s best-known works are the lengthy narrative poems, Don Juan and Childe Harold’s Pilgrimage, and the short lyric, She Walks in Beauty. Weeks after his first and only legitimate child was born, he left England forever. He never saw his daughter again, and died in Greece at the age of 36.

Augusta Ada King, Countess of Lovelace (née Byron; Dec 10, 1815 – Nov 27, 1852) was the only legitimate daughter of the poet George Gordon Byron.  She was a mathematician and writer, chiefly known for her work on Charles Babbage’s early mechanical general-purpose computer, the Analytical Engine. Her lengthy notes on the engine include what is recognized as the first algorithm intended to be carried out by a machine. She signed her work A.A.L. Because of this, she is often regarded as the first computer programmer. She married Lord William King, had three children, and is buried next to her illustrious and infamous father.

Mary Fairfax Somerville (Dec 26,1780 –Nov 28, 1872) was a Scottish science writer and polymath, who wrote about mathematics and astronomy, and was nominated to be the first female member of the Royal Astronomical Society jointly with as Caroline Herschel. One of Charles Babbage’s trusted colleagues, and Ada’s mentor.

More about the playwright, Lauren Gunderson.