Central Works’ world premiere #65: In the capital city of a Central American country just healing from a brutal civil war, everyone is captivated by the TV spiritualist, Parajita (Rudy Guerrero*). Here is a portion of her interview with the lady matador, Suki Palacios (Erin Mei-Ling Stuart), who is about to compete in the first competition of the Lady Matadoras of the Americas.
Recorded during the final performance by Jan Zvaifler
Please play through. 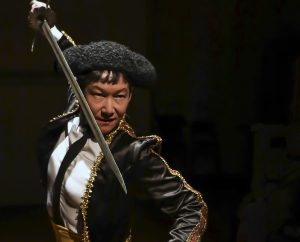 The song Face East was composed for world premiere #48, a Central Works Method musical set in 1973, in the formative years of the ecology movement. Project Ahab converts Melville’s classic story of a man bent on killing a whale, to that of a man determined to stop the killing of whales; or, “Ahab goes after the whalers.” A musical exploration of the early days of Greenpeace.
Lyrics: Ben Euphrat & Gary Graves
Composition & Music Direction: Ben Euphrat
Lead vocals: Sam Jackson
Ensemble and musicians: Michael Barrett Austin*, Ben Euphrat*, Caitlyn Louchard & Clive Worsley
To hear the chorus, please listen from 0:38-0:68, or enjoy the full song from the beginning. 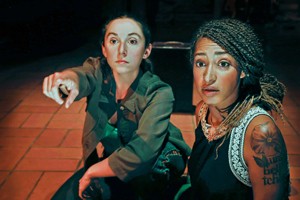