Years in the Hundreds

Written by Jesse Potterveld
Directed by Gary Graves
Produced in: 2017

Download and read the script.
Listen to the podcast!

YEARS IN THE HUNDREDS PODCAST

A mystery…a sis-story…twin sisters spent years fooling the outside world, but today everything changes.

For over half a century, identical twin sisters, Jessie and Inez, have concealed a series of illicit secrets behind the locked door of their neatly arranged apartment.  But then Marcus arrives, and their carefully constructed life begins to unravel.  Peculiar intimacies, unabashed love, and criminal misconduct make for the strangest of bedfellows in this quirky new look at “twin nature.” 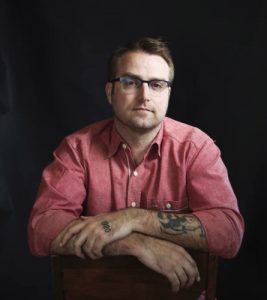 Jesse Potterveld (playwright) is honored  to be included in Central Works’ 27th Season.  His plays have  been developed at the Central Works Writers Workshop, the Kenyon Playwrights Conference and the Sewanee Writers’ Conference. He is Chief of Staff at Wingtip (San Francisco), where he also directs Arts Programming for members and the general public. Years in the Hundreds at Central Works is the first professional production of his work.

**********************
Tamar Cohn (actor) , since her last play at Central Works (Recipe), Tamar has worked with Ubuntu Theater Project (The Grapes of Wrath), TheatreFIRST (Much Ado About Nothing), Theatre Rhinoceros (The Anarchist;  A Song at Twilight), Ross Valley Players (The Clean House; Emilie la Marquise du Chatelet Defends Her Life Tonight), College of Marin (Dead Accounts) and the One-Minute Play Festival. Previous companies include Cutting Ball, Center REP, AlterTheater, 6th St. Playhouse, plus several no longer in business (not her fault!)  She lives in San Rafael with the most supportive husband, and is so happy to be a Central Worker again.

Gary Graves (director) has been a resident playwright and company co-director at Central Works since 1998.  He has been a part of developing 53 world premiere productions with the company, many of which he has either written and/or directed.  Some of the other productions he has directed for the company include Into the Beautiful North, Hearts of Palm, Enemies:  Foreign and Domestic, Machiavelli’s The Prince, Lola Montez, Enemy Combatant, The Mysterious Mr. Looney, Misanthrope, Mata Hari, and Pyrate Story.  He directed the company’s first collaboratively developed script, Roux, at the City Club in 1997.  Since 2002, he has taught playwriting year-round at the Berkeley Rep School of Theater.  Currently, he leads the Central Works Writers Workshop, an ongoing commissioning program that develops new works and offers a variety of playwriting classes.

Anne Hallinan (actor) is delighted to be working with Central Works for the first time. Most recently seen at Center Rep, she has worked with Shotgun Players, Cutting Ball, Berkeley Rep, Boxcar, Stanford Rep, El Teatro Campesino, TheatreFIRST, Those Women and Bay Area Children’s Theater, among others, and is a former company member of Woman’s Will and the San Francisco Mime Troupe. Film credits include the award-winning White Rabbit.  She can be seen next in Utopia Theater’s The Seagull. For more, go to www.annehallinan.com 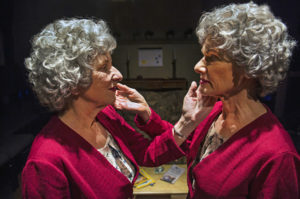 Twin sisters, Inez (Anne Hallinan) and Jessie (Tamar Cohn),
have shared a home and a secret for 50 years in
Jesse Potterveld’s Years in the Hundreds. 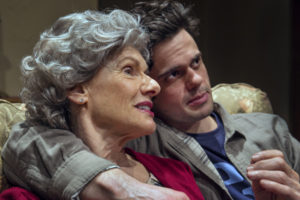 Jessie (Tamar Cohn) and Marcus the “Book Man,” (Adam Roy) have their own special connection in Jesse Potterveld’s new play, Years in the Hundreds. 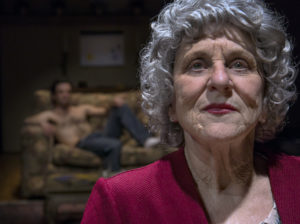 Inez (Anne Hallinan) has her own ideas about love
and relationships in Central Works world premiere production
of Years in the Hundreds (with Adam Roy).

Photo by J. Norrena All photos: ACT OUT Photography by Jim Norrena 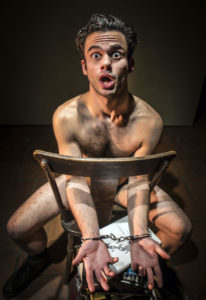 “Rarely has the unloveliness of aging been so lyrically, so weirdly evoked” –SF Chronicle

“a devilishly intelligent piece of theatre” –My Cultural Landscape

“Years in the Hundreds amazes” –Theatrius

“as close as it comes to ‘theater in your lap’ … riveting, raw, and relevant” –East Bay Express

“[What] makes Years In The Hundreds engaging…is the tension generated by the idea that everything you’re watching is both utterly strange but acceptably normal at the same time. –Edge Media

This week’s theatre recommendation on The Rumpus, “funny, strange, and nicely performed and directed.” 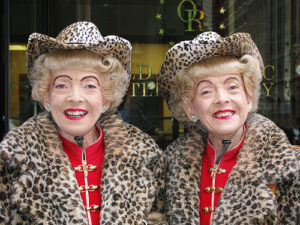 Do you remember these twins?

National Geographic delves into “twin nature” – Read about it!

Read how to tell identical twins apart in TWINS magazine. 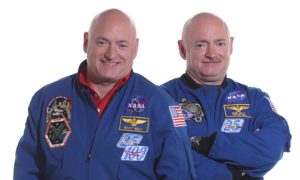 NASA’s “Twin Study” did wide-ranging research
on twins in space!