Escape From the Asylum

written by Patricia Milton
directed by Gary Graves
Produced in: 2022

In 2019, we premiered The Victorian Ladies Detective Collective—three determined “lady” sleuths fighting crime and prejudice in Victorian London. Now they’re back at it! A famous female explorer has been committed to Belfry, a notorious asylum for the mentally ill. Has her unscrupulous husband had her falsely committed just to gain her fortune? The intrepid lady detectives are on the case!

For more information about the rest of the 2022 season, click here!

For your safety and out of respect for our more vulnerable patrons and staff members, we require proof of up to date vaccination status and masks for all patrons until further notice.  Click here for more information on our safety policies

All remaining seats are available on a sliding scale at noon on the day of the show: $40-$15 (Fri-Sat)
Full pay-what-you-can (Thur & previews)
We reserve seats only for subscribers, it is general seating for all other ticket holders.

Patricia Milton (playwright) is a Resident Playwright for Central Works and a long-term member of the Central Works Writers Workshop. Plays written for Central Works include: Bystanders (audio play produced in 2020), The Victorian Ladies’ Detective Collective (2019), Bamboozled (2018 Outstanding Production; Ensemble; Finalist, Outstanding World Premiere Play, TBA Awards), Hearts of Palm (2016), Enemies: Foreign and Domestic (2015), and Reduction in Force (2011). She is a recipient of the 2015 Outstanding World Premiere Play by Theatre Bay Area for Enemies: Foreign and Domestic. The Victorian Ladies’ Detective Collective was presented by the International House of Theatre outdoors in Copenhagen in July 2020. Her comedy Believers has enjoyed productions in Monterey and San Francisco, and played for three years in Istanbul, Turkey. Her drama about the death penalty, Without Mercy, was presented at the Newfoundland Women’s Work Festival and was produced in 2017 by Off Broadway West Theatre Company in San Francisco. Upcoming at New Conservatory Theatre is an audio version of her comedy The Law of Attraction, commissioned by NCTC. Ms. Milton has had more than one hundred productions and readings of her plays both locally and internationally, including at 3Girls Theatre, San Francisco Exploratorium, PlayGround SF, Woman’s Will, Women’s Theatre Project, Bay Area One Acts, and City Lights Theatre. She is Northern California Regional Rep for The Dramatists Guild, and produces a monthly podcast for the Central Works Script Club. 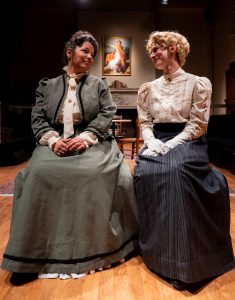 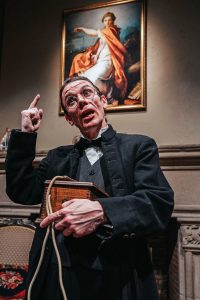 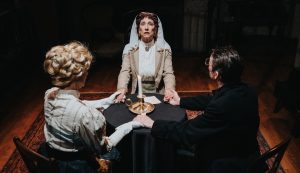 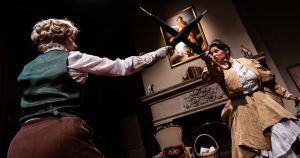 “Escape from the Asylum is a delightful madcap comedy!” E. Mendel, Berkeleyside

“The play is full of Patricia Milton’s typical blend of puns, political satire, and scholarly feminist insight, all played for laughs and maximum damage to patriarchal pomposity.” C. Kruger, TheatreStorm

“Central Works’ Escape from the Asylum returns us to the male-dominated Victorian era, to shine a powerful light on women’s fight for freedom. Their sharp wit surpasses their label as merely ‘ladies.’ ” P.Morin, Theatrius

“this reviewer watch[ed] with glee and admiration the ingenuity and courage of three women who ignore the biases of their world in order to outsmart the men around them as they fight for the rights and lives of women.” E. Reynolds, Theatre Eddys 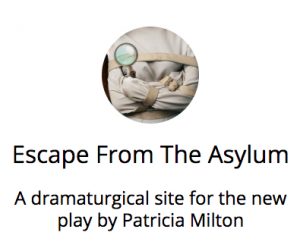 Want to read the play scripts?

Read the Escape from the Asylum script here